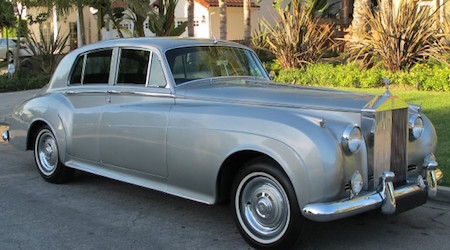 First debuted in 1956, the 1957 Rolls Royce Silver Cloud I would be the second iteration of the model. Similar in many ways to its Silver Dawn precursor, the Silver Cloud was a four-door saloon with a front-engine, rear-wheel drive layout. The 1957 Silver Cloud I also reflects a decided upgrade from the original, and would see a considerably higher volume of production thanks to new manufacturing efficiencies stemming from the use of the steel body shells via Pressed Steel Company. Three iterations of the Silver Cloud would go into production; the first of these on its own saw more Silver Clouds produced than what ten years of Silver Dawn production yielded.

As mentioned, the 1957 Rolls Royce Silver Cloud I was a body-on-frame construction, which utilized steel body shells. But, the format also allowed for customization, and numerous coachbuilders would place their design stamp on the line. Coupe and drop head variants were uncommon, but did exist. Under the hood, a 4.9 liter six-cylinder engine would power the heavy car to more than 100 mph. A four-speed Hydramatic transmission via General Motors was also used and further distinguished the Silver Cloud I from the Silver Dawn.

Are you the owner of a 1957 Rolls Royce Silver Cloud I? If so, the Alex Manos team would be delighted to speak to you. Always in the market to purchase classics of all makes, models and conditions, their team would love to learn more about your particular Silver Cloud model. With years of experience in the classic car industry, their team has their finger on the pulse of the market and can help you determine the value of your classic based on the current market and the car’s condition and rarity. Should it fit into their inventory, you can count on a top dollar offer, payable in cash, on the spot. In fact, their team will even arrange for transportation from any location in the country. Take the hassle out of selling your classic. Contact the Alex Manos team today to explore your options. They look forward to hearing from you soon.

Selling Your Rolls Royce Silver Cloud? My name is Alex Manos and I’m a serious classic car buyer/collector. Whether your Rolls Royce is in mint condition, a project, or in a barn the last 30 years, my team and I want to talk to you! If you have a classic car you’re looking to sell, regardless of condition, call 877-734-5642, or contact us via the website. Let’s Talk Today!