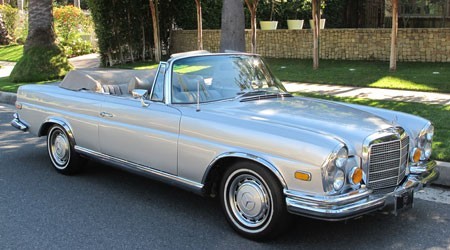 Favorite classic Mercedes-Benz automobiles include supercharged pre-war era cars, and Mercedes convertibles as late as the 1960s. The SL-Class grand tourer, manufactured since 1954, is the Sport Lightweight model. Numerous variations within the SL line can be found including engine configurations. The first generation of SL, both the Mercedes-Benz 300SL and 190SL, had their start in 1954. Until 1963 1.9 and 3.0L, four speed manuals were produced. There were over 25,000 four cylinder 190SL Mercedes sold. If you buy or sell classic Mercedes you’ll find both coups, removable hardtops, and convertible soft tops.

The second generation was offered as a four speed automatic or manual transmission as well as a five speed manual. The engine sizes were 2.3, 2.5, or 2.8. The 230SL had big curved windows and a distinctive roofline. Around 1967 the 230SL became known as the 250SL. The engine was displaced and increased again until it became the 280SL, a favorite vintage Mercedes.

What’s my Classic Mercedes Worth?

If you wish to sell classic Mercedes you do well to know what makes your specific year and model special. The 1956-1959 models, for example were built with a modern paint system to deter rust. Many of the models still rusted, often on the front two wings. If you have one without rust, this is good. Very few 300SL base models were sold. The SOHC six cylinder M103 is thought to be better handling than its heavier-engine counterparts.

If you’re searching for a reliable partner to buy or sell classic Mercedes or other rare vintage automobiles, work with AlexManos.com. The team knows the current market and connects unique, beautiful cars with good homes. To learn more about how to sell your Mercedes or other classic car, connect with Alex Manos and team today.[sociable/]